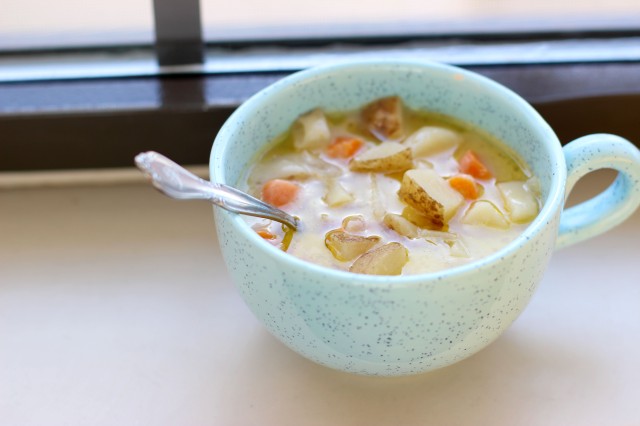 The howling wind, fast accumulating snow, canceled classes, and snow emergencies offer the perfect opportunity to stay inside and cook. And what better comfort food to warm up with than steaming hot soup?

Soup is a typical dish for a college student, but most of the time it is consumed in a pre-made form direct from a can. I love soup, but the canned version in the store just doesn’t cut it for me. This is where the crock pot comes in. There are millions of recipes for potato soup, but this recipe came about from just throwing together everything I had in my dorm one day. Most of the ingredients I often have on-hand, so it is something I make frequently.

The veggies get chopped into relatively small pieces so they cook more quickly in the crock pot. I usually just add potatoes and carrots, but if you have other veggies such as onions or celery, feel free to add those as well. Sure, it takes some time to chop everything up, but it is well worth it to have fresh ingredients, and a cutting board doesn’t take up much room. I’m sure you have a little space left on your desk, and if you don’t…well…maybe you should be working on some of that homework. Well, start the soup first, and then you can do your homework while its cooking and be rewarded by a delicious meal after that 10 page paper is completed! 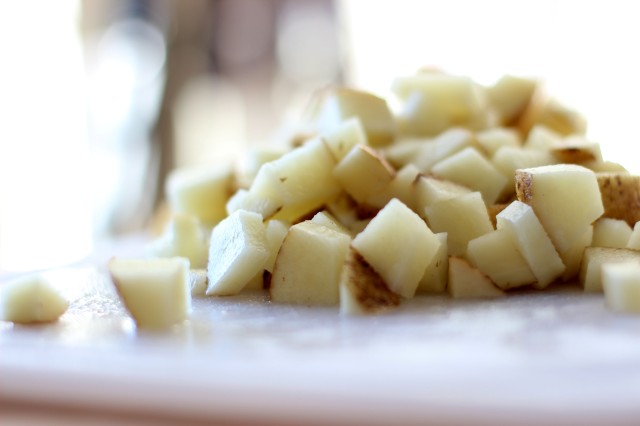 The veggies go right in the crock pot to get stirred around with a tad bit of butter and spices for subtle flavor. I usually let the veggies cook in the crock pot by themselves for about a half hour or so before adding any liquid. 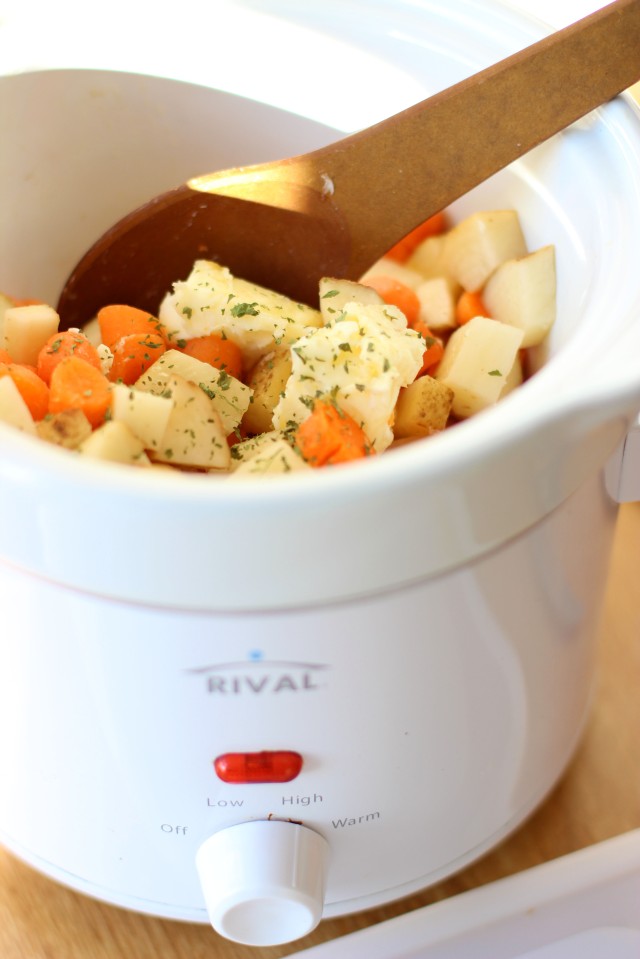 Finally, add the chicken broth. There will be more liquid added later for the creamy part, so go easy on the liquid here or the soup will be really thin. I like a thick, hearty soup to actually feel like I’m eating something instead of slurping on broth the whole time. 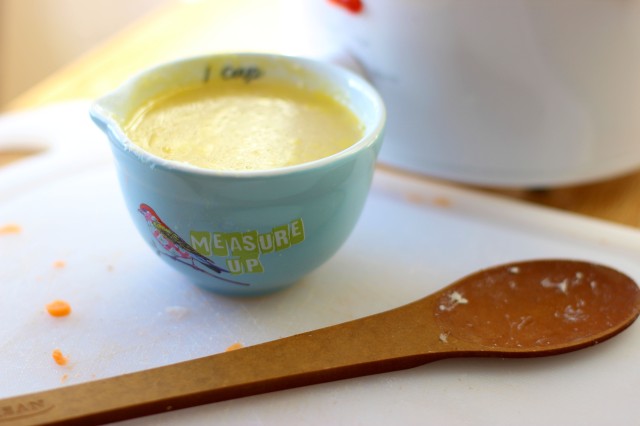 The super cute measuring cups are from my roomie, Heidi, as an early Valentine’s Day gift this year. Yep, way better than chocolate! I couldn’t resist using them right away.

Once the soup has time to cook, the veggies soften, and the flavors blend, it is time to add the creamy part. Sometimes I just add heavy whipping cream to thicken the soup, but my favorite is to make a cream sauce and then add it to the soup for the last 15 minutes of cooking. It adds great flavor and consistency. Don’t add the cream part too early or the soup gets really greasy, and sometimes it thickens too much.

I also highly suggest making the soup with chopped ham because that really adds a good dimension and flavor boost without a lot of spices, but if you don’t have any, you can still make the soup with good results. As it simmers away, the inviting aroma is a great distraction from the nasty weather, or the ever impending homework…either way…its delicious. 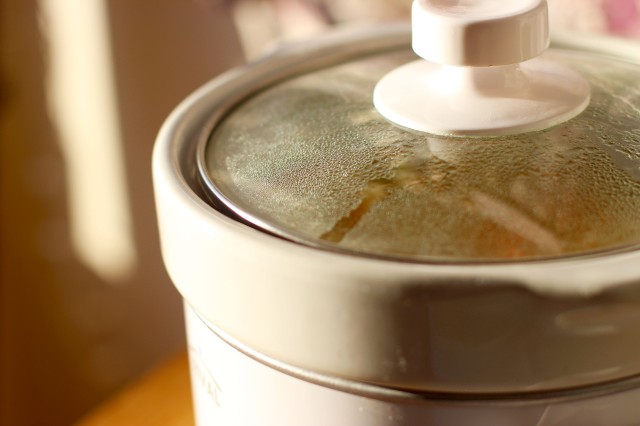 Chop the potatoes and carrots into 1/2 inch cubes while 1 tsp of butter is melting in the crock pot on high. Add the veggies and ham to the crock pot and stir with the butter, salt, pepper, and parsley. Let cook on high in the crock pot for 30 minutes, stirring every 10 minutes if able to. Add chicken broth until it completely covers the veggies and ham. If ham isn’t available, feel free to use chicken or bacon as substitutes. Let cook on low for about 4-6 hours depending on your crock pot. I use a 2 quart-sized crock pot, and this recipe fits in it perfectly.

Now that wasn’t too hard, was it? And, it’s a definite upgrade from ramen and canned soup!