Growing up I loved making German Oven Pancakes. They only included a few ingredients, were super easy to throw together, and were a special treat I made for my brother and I. They are meant to be made in an oven, and I never thought about making them in a sandwich maker until the other day. I didn’t think they would puff up enough, but they turned out better than I expected. Instead of making a sweet version as is common, I decided to pair it with the ingredients I had on hand which included cheese (of course), veggies, and ham. I have made omelets before in my sandwich maker, but sometimes the egg flavor is too overwhelming for my taste. This recipe combines the best of both worlds.

The “pancake” batter is made first with just three simple ingredients. 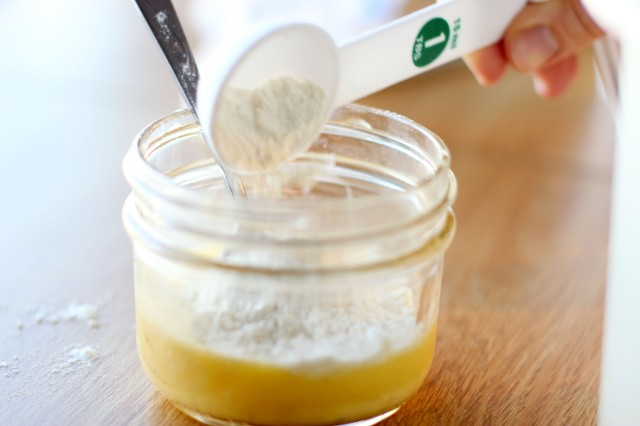 A basting brush isn’t something most college students (even ones who really enjoy cooking) tend to keep lying around, so I improvised with a piece of broccoli which was used to grease the sandwich maker after I poured melted butter into the maker. 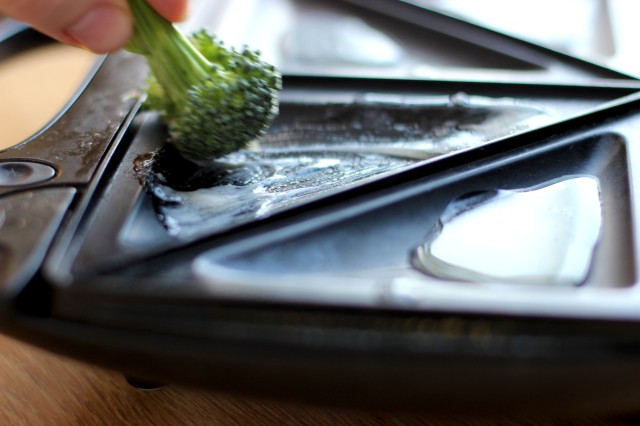 Only the bottom of the sandwich maker plate gets greased, and batter goes right on top of the butter.

Topping options are endless, but I just used what I had in my fridge.

Pile the toppings onto the pancake/egg mixture, and top with the rest of the egg mixture. It might get really close to overflowing, but the higher the batter, the better it cooks and the cleaner the omelets come out of the sandwich maker.

Four mini omelets serve one person almost perfectly (unless you aren’t very hungry in the morning). 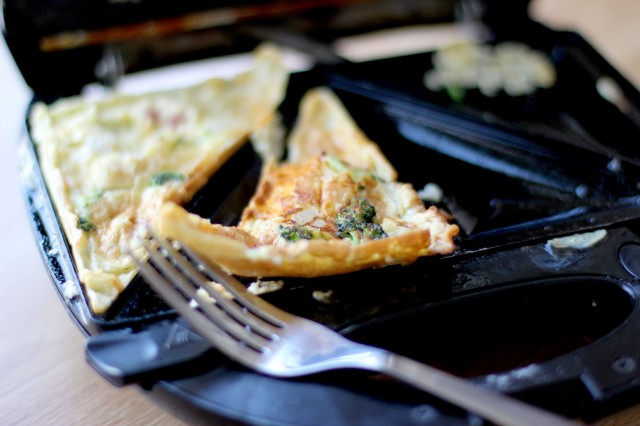 Combine the egg, flour, and milk. Melt the butter and pour equally into the different compartments of the sandwich maker. Use a broccoli floret to spread the butter around and evenly grease the sandwich maker plate. Drop batter by tablespoons into the maker. Top with each of the desired toppings, and complete with the remainder of the batter. Bake until the indicator light changes color or approximately 5 minutes. Let set for 1-2 minutes after the sandwich maker is turned off. Carefully take out and sprinkle with more cheese if desired. Eat fresh.